Intriguing illustration, don’t you think? My husband received an issue of Puck, a New York magazine dated 1895 as a gift from my parents. And, surprisingly, the center spread was this illustration. The Chinese emperor, looking rather ill, is being served ultimatums (hard pills to swallow) from Britain, Russia, and Japan. Humm, that got me really curious.

What was happening in China in 1895 which would explain such caricature? What was Britain doing? What about Russia? And Japan?

Britain? Well, my story on Gulang Yu already talked about Britain’s pressure on China to open ports for trade (Opium Wars). In 1894, Britain was negotiating with China to extend the convention on Hong-Kong territory, finally signed in 1898… for 99 years as we all know. The Treaty of Nanjing, in 1842 at the end of the First Opium War, had already given Hong-Kong to Britain.

Russia?… my research led me to learn that at the time, Russia was pressuring China with troops in Manchuria. 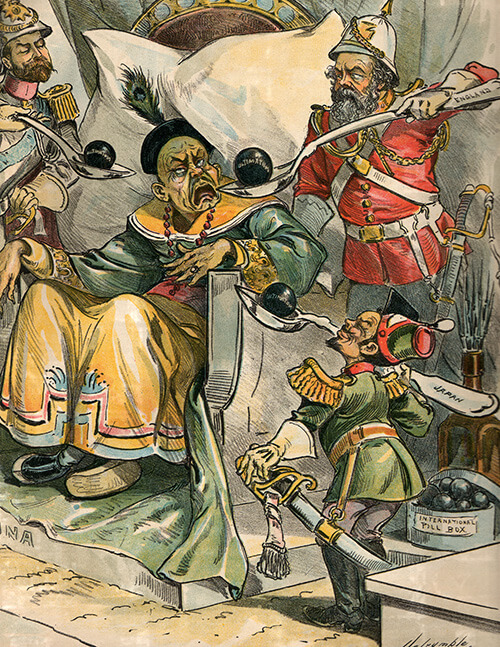 Japan?… I discovered that in 1894-1895, Japan was actually at war against China over Korea. With China weakened by the wars with Britain and France, Japan desired to reduce China’s influence over Korea, worried that Korea would get under the control of another military power (simply too close to Japan for comfort!).

The interesting thing about Japan is that, at the time, Great Britain and France actually helped Japan build their Navy, training the Imperial Japanese Navy in gunnery and seamanship and building ships for Japan. Something the allies may have regretted a few years later.

April 1895: the war concludes with the Treaty of Shimonoseki (known as the Treaty of Maguan in China), in which China recognized the independence of Korea and ceded Taiwan to Japan. So Taiwan belonged to Japan at the beginning of the 20th century? I did not know that! At least not until a few days ago, when one of our business partners here in Xiamen, who is from Taiwan and loves to discuss the relationship between China and Taiwan, told us about it. Taiwan – China relationships… quite a subject, right? For future postings…

So mission accomplished: The role of every actor in the historical illustration is understood. It was quite fun to play detective to understand what led to its drawing in 1895. I hope you enjoyed it too.

(What I did not say is that the other part of the illustration showed the Egyptian being happy to be left alone. I researched that as well, but that is another story, which has nothing to do with China).