June 1, 2009: I get a very unexpected call from the Vermont Council on World Affairs.

It will be the beginning of an incredible adventure, which took me three times to France, in less than three months, on the steps of Samuel de Champlain!

It was part of an extraordinary project and vision, to bring 36 young chorists from France, Quebec, and Vermont together, traveling for 6 weeks in these three regions, on the steps of Samuel de Champlain. All this in the context of the celebrations of the 400th anniversary of the discovery of Lake Champlain by this explorer in July 1609.

What an unbelievable chance to be part of such an adventure! 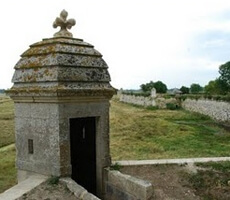 In France, I will be taking them to Brouage, the birthplace of Samuel de Champlain, Honfleur, the harbor from which his expeditions started, Paris, where he lived, La Rochelle, Saint-Malo, and more…

You can read some of the stories of this trip here, under “Harmonie en Héritage“.

It is one of the best memories of my life.

Here is the translation of what I wrote in the last post, at the end of the trip:

“The trip is now over, but I am sure that all the students and their escorts will remember it for a lifetime. As we were driving on the roads of France, I explained to them the incredible luck they had to witness what Champlain’s expeditions and the development of New France meant and looked like on both sides of the Atlantic: from France, with the old shipyards, the old salt warehouses, the arsenal and rope making factory, the ports of Honfleur, Saint-Malo, La Rochelle, Rochefort and of course Brouage, where people and supplies left from to cross the Atlantic, to Quebec City and Lake Champlain, founded and settled by men of great courage, bravery, and perseverance.

When our group arrived in Brouage, I took a minute to have them appreciate the importance of this small Citadelle (400 m long by 400 m wide) where people still live peacefully today. “This place is where it all started,” I said “Quebec City, New France, all because of one man, Champlain, who was born here”. To my surprise, they all started applauding and chanting “Champlain, Champlain, Champlain!”. Like me, they had perceived how special this place and moment were… Champlain himself could not have imagined that young students would chant his name 400 years after he explored this “far away land” of New France.”