This post may contain Amazon Affiliate links for which I may receive compensation.
Australia is having a major cartography exhibition “Mapping Our World” until March 10, 2014.

Imagine more than 100 maps, atlases, and globes, some of the greatest works from the collection of the British Library, the Bibliothèque Nationale de France, the Vatican Library, and naturally the National Library of Australia.

As we – in the northern hemisphere – live on the other side of the world, it is unlikely that most of us will get a chance to go to Australia and enjoy it.

But fortunately, the National Library of Australia has put together some wonderful videos, telling us the story of the exhibit, and of some of its maps.

The exhibition reminds us of the time where the Mediterranean world was the only known world. It takes us from the time when a “south land” (australis) was only a concept, to the time of the first Dutch explorations and New Holland to the race between the French and the British to draw the first complete map of Australia.

The first video is an overview of the exhibition.

“Putting Australia on the map“, the second video, shares some gorgeous maps from the early depictions of the “south land” to maps of New Holland by the Dutch in the 17th and 18th centuries.

The story of this spectacular map “Archipelagus Orientalis” acquired by the National Library of Australia in 2013 is presented in the 3rd video “Preserving Blaeu’s ‘Archipelagus Orientalis’ (1663)“. The map drawn by the famous Dutch cartographer Joan Blaeu is the most important map documenting the Dutch presence in Australia prior to the arrival of the British.

The 4th video is telling the story of one of the most important and famous world maps of all time. Drawn by the monk Fra Mauro between 1390 and 1459, it is the first time in its almost 600-year history that it leaves Italy. It is impressive in its details, surprising in its shape and size – truly unique. The 5th video takes us behind the scenes to follow its trip across oceans from the Biblioteca Nazionale Marciana in Venice to the National Library of Australia.

On April 8, 1802, two explorers – Frenchman Nicolas Baudin and Englishman Matthew Flinders – sighted each other during the conquest to explore the uncharted part of Australia. It reminds us how the history of cartography is so closely connected to the history of explorations and expeditions. Both the French cartographer Louis de Freycinet and Flinders charted much of the Southern and Eastern parts of Australia, and much more closely than had the Dutch, both had access to the Dutch charts of Northern and Western Australia and made use of these to complete their work. This 6th video “Flinders and Baudin’s race to map Australia” reminds us of the story. A book has been also written about their expeditions: The Great Race: The Race Between the English and the French to Complete the Map of Australia.


If you had the chance to see the exhibit, we would love to know what you thought about it. Leave us a comment below! 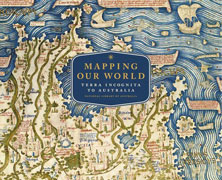 Mapping Our World: Terra Incognita to Australia
Lose Yourself in the World’s Greatest Maps.
Address:
National Library of Australia
Parkes Place
Canberra ACT 2600, Australia
Hours: 10 am to 6 pm daily
Admission: free, but you must book by phone 02 6262 1271 or online

If you missed the exhibit, you can still buy the exhibition catalog: Mapping Our World catalog

For more photos of the exhibit, see the ABC article “Rare map exhibition attracts record crowds to National Library in Canberra“. When the exhibit closed on March 10, 2014, 118,264 people had seen it. This was a new record of visitors for an exhibit at the National Library of Australia, a record previously held by the 2001 exhibit “Treasures from the World’s Great Libraries“, which had attracted 115,081 visitors at the time.