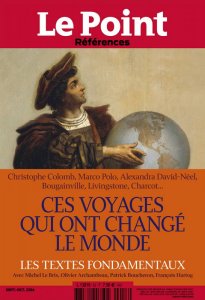 At the origins of globalization, were men, adventurers and explorers, who, by their travels, contributed to contacts between civilizations. What was their state of mind? With what cultural baggage and prejudices did they approach unknown lands?

In a special issue titled Ces voyages qui ont changé le monde, the French magazine Point References presents a number of iconic stories of great explorers throughout history and the world. These texts – diaries, letters and companions’ narratives – allow us to better understand their motivations, their behavior and their unusual destinies.

For this issue, writers and editors Sophie Pujas, Patrick Franceschi and Olivier Archambeau are bringing to us their analyses and the original texts of the adventures of Magellan, Christopher Columbus, Marco Polo, James Cook, Zhang Qian ou Leif Eriksson.

Currently at your newstand or on line at: Le Point store.