A misty morning in Normandy. Green pastures and Normandy black and white cows grazing. To my surprise, the GPS is taking me on a country road that is so narrow that I am not sure what happens if a car comes in the other direction! The landscape is simply magical and my only regret is that I am not sharing this moment with my husband!

The village of Camembert is tiny. It doesn’t even have the traditional bakery and bar that seem to be features of every French village or town. Camembert has a church, a city hall, one house, and the museum of Camembert. That’s all. And it is so quaint! Who would have known that one of the most popular cheeses in the world was invented in a village which remains so quaint and tiny even today! 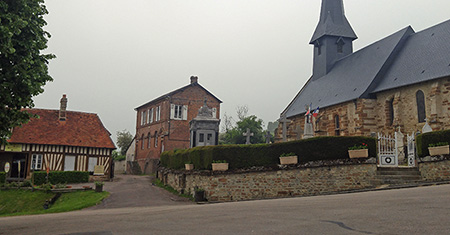 First, the development of railroads, in particular the line from Paris to Lisieux and Caen, helped the expansion of the cheese and its popularity with Parisians. A few years later, the grandson of Marie Harel gave a piece of cheese to Napoleon III, during one of his visits to Normandy, and the emperor was so enthusiastic that, from that time on, no meal was ever served at his residence The Tuileries without the prized cheese!

Later its round wooden box will not only protect the cheese but be a great communication tool.

The visit ends with the tasting of 3 Camembert cheeses, with their distinctive flavor: from mild for the pasteurized one to a bit stronger for the thermised one and finally to the stronger raw milk Camembert.

As I am driving away from the historic village of Camembert, I take a large bite in the sandwich I prepared earlier: it is undoubtedly the freshest, creamy, best-tasting Camembert I ever ate! We’ve got to come back!