Christine Ferber, the “French queen of jam making” or the “Jam Fairy” as her friends call her!

She was even featured by the New York Times in this fascinating article “From Alsace, Sweet Love for the World” and by Saveur Magazine in “Jam Session – A French chef makes fruit preserves a cult favorite”. So the fact that I got the chance to meet her in person in her small pastry shop is something I never expected to happen, and something I will never forget. It was truly a memorable moment.

Before I go any further, let me apologize for the fact I don’t have a photo of her, but just a photo of her lovely jams. I caught her – unannounced – in her kitchen at the end of a long day, and she did not want me to take her picture. She just did not think that she looked good enough for the camera! Perfectly understandable.

How I Discovered Christine Ferber

The first time I heard of Christine Ferber was when I bought one of her books. I was developing recipes for our Cheese Companions and had bought a number of French books on jams. They all had very creative ideas of combining flavors, but I got particularly interested in her recipes, as she often commented about pairing her preserves with cheese. After months of testing recipes, one day I decided to try an adaptation of her cherry thyme preserve. I was immediately seduced: the association of the sweet cherry and the fresh thyme was delightful. Additionally, in the Basque country, cherry preserves are a traditional pairing with local sheep milk cheese, particularly tome. That flavor combination had everything to make it a winning product, and we did not get disappointed.

Having been introduced to her talents in this manner, how could I ever forget her? Since then, I have noticed that she is often mentioned (and admired) by renowned jam makers or food bloggers. At the store of our friends from Blake Hill Preserves, Vicky, a third-generation jam-maker, sells one book and one book only on jam making and it is the English jam-making book from Christine Ferber. Aran, the food blogger from Cannelle & Vanille has also declared her long admiration for Christine Ferber. She loves “her rustic, simple and natural approach to food.”

A Little Village in Alsace 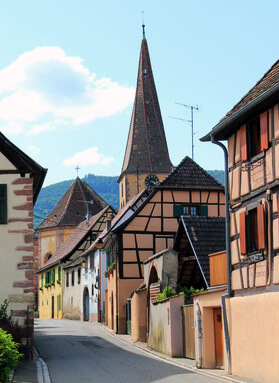 So when I learned that she still owned a pastry shop in a little village of Alsace and that I was driving through that region on a trip from Germany to our little house in Brittany in May, I knew that I had to make the detour.

Niedermorschwihr is a typical Alsatian village, right in the middle of the wine country. It is tiny and quaint, with an architecture clearly influenced by the history of this region that went back and forth from being German to being French. It was raining when we got there at the end of a Friday afternoon in May, and we quickly found the small pastry shop. Boy, how much I regret now not to have taken a photo of her storefront, despite the rain (to see a photo of it, click on this article from Chocolate & Zucchini). When we came in, we were welcomed by a display of nice French pastries. Except for the large display of jams on the left wall, the place looked pretty much like any pastry shop in any French village. After tasting a couple of her jams, and selecting an exotic passion fruit jam and 2 pastries, we got to the cashier to pay. Bravely I asked if Christine Ferber was there. “Yes, she is” simply replied the cashier. After a moment of hesitation, I adventured to ask: “do you think I could meet her? I have a small company, we make preserves for cheese accompaniments and one of my products was inspired by one of her recipes.” “Let me check” she replied. When she came back from the kitchen, the answer was “Yes, but only for a few minutes as she was waiting for a group.” In the kitchen, in the back of the store, my husband and I were introduced to Christine Ferber…

Here she was, in the middle of her kitchen, with a few employees around her, busily spreading melted chocolate over metal sheets…! We squeezed into a corner of the room, not to disturb the flow of the work, and Christine Ferber answered my questions one by one, with simplicity and humility.

How did she start? Where did she train? What about the cookbooks? How many people work with her?

She answered them all. And what was fascinating to me is that – despite her worldwide success – the person we met that day was not someone looking for the spotlights of fame, but a simple craftsperson working hard at her craft.

Her great grand-father, grand-father, and father were all bakers in this Alsatian village and she simply took over the bakery. She trained in pastry making in Brussels and in Paris (her biography mentions that she trained with the renowned pastry chef Lucien Peltier in Paris).

When she came back to Alsace, she worked 2 years all alone. It took a lot of time and hard work to get where she is today. The week we were there she had just moved her jam-making operations to a new location in the village. She now has 30 employees and some of them have been with her since the beginning! She still starts every day at 5:30 am and she still checks every single jar of jam that leaves her kitchen!

When I asked about her cookbooks published in a number of languages and sold around the world, she simply replied: “It was not my idea. People asked me, and I just did it. And they translated them.”

As she continued to talk to us, spreading chocolate on sheets, adding nuts, she was also keeping an eye on a young trainee and warmly correcting him on the precise hand movement he needed to have to perfectly mix his bowl of melted chocolate. I could feel her deep caring for the work and the people. And I could feel the years of hard work which made her who she is today.

“This work takes a lot of concentration and no distraction,” she said. It was time to leave her to her work and to enjoy the memory of a very special moment.

An Inspiration to Make More Preserves

Back in Vermont, I am back in my kitchen, making preserves with seasonal fruits – not for sale, just for my own pleasure. Christine Ferber has re-energized me. She has given me a renewed desire to celebrate the wonderful flavors of fruit in all its forms. Thank you so much, Christine!

For more information on Christine Ferber:

Two of her jam-making books:

Where to buy Christine Ferber’s jams in the USA: Ann Marie’s Shop Europe