We watched a really interesting program on the Discovery channel two nights ago on how Beijing is getting ready for the Olympic Games. It was fascinating.

It interviewed some experts who summarized traditions and symbolism in Chinese architecture, a lot of the things I had read here and there before.

They discussed the symbols of the square representing the earth and the circle representing heaven. You see these symbols in historic buildings such as the Forbidden City and it is interesting to see that the same symbols are used today in the design of the Olympic buildings: the two buildings you now hear about are the Cube and the Bird’s Nest (stadium), a square and a circle…

Actually, what they did not mention is “why a bird’s nest?”. I suspect it is because a bird’s nest was actually an imperial delicatessen.

Then they talked about the well-known “central axis” going through Beijing from South to North, through each important building from Tiananmen Square, the Forbidden City to the Drum and Bell Towers, etc. and now at its extreme North through the Olympic area, with the Cube at its left and the Bird’s Nest at its right.

They also talked about the “power of empty space” and the emotions such spaces create in people.

Humm, this is what I was trying to convey when I was describing the Forbidden City courtyards in a previous blog post. This is the feeling of the Forbidden City: the emotion doesn’t come so much from the size of its buildings (not exceptionally tall or large) but from the huge empty spaces.

Well, another part of Beijing which we really liked and which was presented in the program is the old private courtyard houses in the district of Hutong.

Sadly, a lot of them are currently being destroyed as the city and its highways are expanding, and because Chinese people don’t seem to value very much their architectural heritage, to our constant surprise.

Interesting to know what governs the architecture of these courtyards: four buildings around the courtyard, the North building, the most important one, for the parents; the sons in the East buildings (for better sunlight) and the daughters in the West buildings. A similar preference for the East buildings is seen in gardens that I visited in Suzhou and in the Forbidden City itself. Interesting…

Then we move from the subject of architecture to the huge challenge of the Beijing Olympic Games: will Beijing deal with its huge pollution problem in a manner acceptable to the Olympic committee? An extensive subject.

And Beijing is desperately trying to solve the problem. We learned that they are moving a whole steel plant, employing 85,000 people, away from its current location, 16 miles from the city.

They are policing the car exhaust fumes. They have a fascinating piece of equipment that measures exhaust fumes and automatically takes a photo of license plates, to fine car owners who don’t respect the norms (you know, the same kind of equipment we have in the US for speeding!). You have to know that Beijing has already 3 million cars with 1,000 more every day.

And Beijing is doing a lot of other things in preparation for the Games: 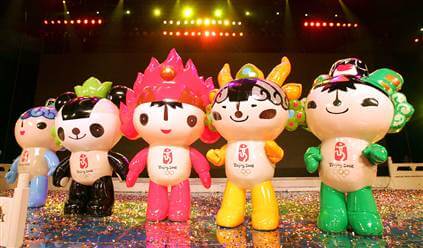 Oh, by the way… have you seen Beijing Olympics’ 5 little mascots? Do you know that their 5 names together mean “Beijing welcomes you!” in mandarin…

Well, Beijing is getting ready to welcome 2.5 million visitors for the 2008 Olympics!

Reserve your hotel now if you intend to go! I hear a lot of them are already sold out.