Last night was a rainy evening in Xiamen. But it was also the night when we finally went and wandered through the great displays of lanterns not far from our apartment.

For the past month, we have observed the construction of large and colorful displays on the little flat and probably artificial island in the middle of the (artificial?) lake on Xiamen island – including two huge dragons with their long tails, right in the middle of the water! Preparations for the Chinese New Year, we thought. We were surprised to see it was still there at the end of the holiday time and it is still beautifully lit every night… We had been traveling and on jet lag. I am ashamed to say we were too lazy to venture there.

So it was really time to enjoy the scenery despite the wind and rain. After all, they will probably be dismantled any time now. So here we went. Quite interesting indeed. There must have been 100 or so very large structures. The funny thing is that they are actually all “advertising pieces” promoting the latest real estate developments here in Xiamen or things of that sort. They look pretty much like the floats at the Thanksgiving Parade on Fifth Avenue, except for the fact they are hollow structures lit from inside… They are truly giant lanterns. 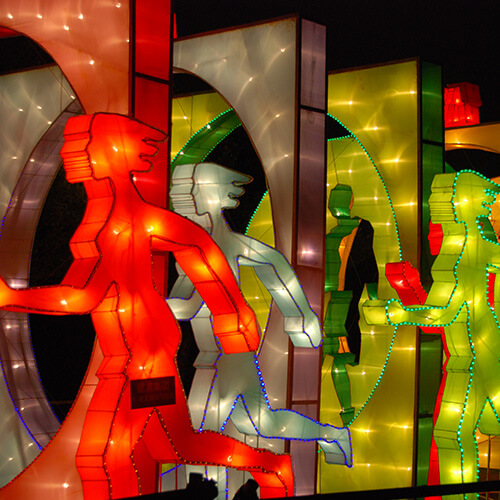 Of course, they explored traditional themes, dragons, and cute little mouses (this year’s astrological animal), but I really enjoyed the originality and beauty of some less traditional ones like these women running and the nice Chinese garden with flowers.

But I am sure that I would disappoint my loyal readers if I did not add a bit of history to my blog post… So here it is: the Lantern Festival marks the end of the celebrations for the Chinese New Year on the 15th day of the lunar year, on a full moon. It is a celebration of lion and dragon dances, fireworks, eating rice dumplings, and of course, lanterns. I also read that an essential part of the Festival is “guessing lantern riddles.” Riddles are posted on lanterns which visitors try to guess. If they guess right, they’ll receive a small gift from the lantern owner!

And the origins of this Festival? Well, it is amazing to see that there is nothing – it seems – in China, which doesn’t have about 2000 years of history! And the Lantern Festival is no exception. It dates back to legends of the Han Dynasty over 2000 years ago. The funny thing – somewhat similar to what I found about the legends of how silk was discovered – is that you can read different legends in different articles, all stating very authoritatively that “this is THE legend of the Lantern Festival.”

So, here they are: 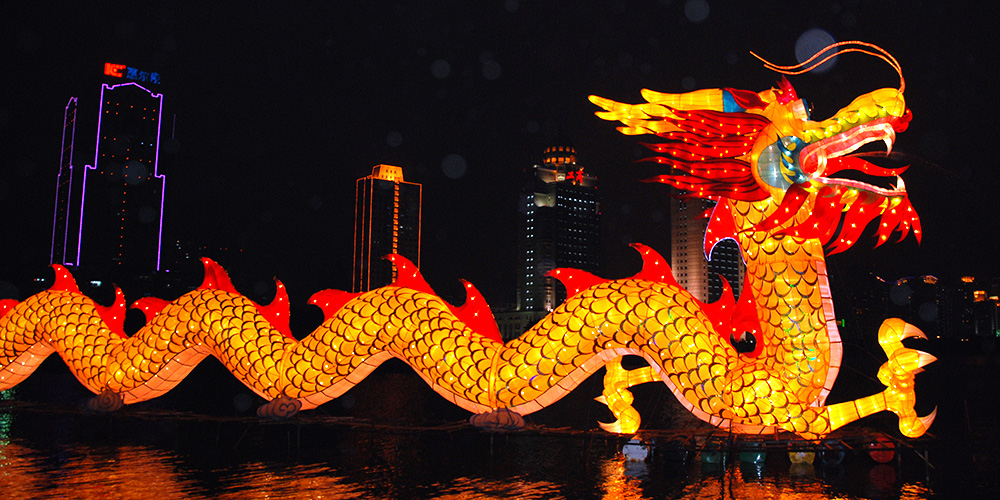 One legend reads that an emperor from the Han Dynasty ordered to light lanterns in the imperial palace and temples to show respect to Buddha on that day, as he had heard that Buddhist monks were lighting lanterns as they were worshipping Buddha and watching the remains from his cremation.

But I love the other legend even more… Here it goes. The Jade Emperor in Heaven was very angered at a town for killing his favorite goose, so he decided to destroy the town with a storm of fire. A good fairy heard about the plan and warned the people to light lanterns throughout the town. From Heaven, the village looked ablaze. Thinking that his goose had already been avenged, the Jade Emperor did not execute his plan. From that day on, people celebrated the town being saved by lighting lanterns in the street… on the first full moon of the year… Isn’t it a wonderful story?