Xiamen is preparing itself for a celebration. It is the mid-autumn festival here in China, one of the most important celebrations of the year. Don’t be confused, as we are end of September and you are thinking it is the beginning of fall. We are on the lunar calendar here in China, and the autumn has started sometimes in August. The mid-autumn festival will take place on the next full moon, on Tuesday.

It is a celebration for friends and family to gather and we should see fireworks here in downtown Xiamen. But more importantly, the mid-autumn festival is about 2 things in Xiamen: moon cakes and dice games.

Made from a thousand recipes with savory and sweet fillings, the moon cake symbolizes the moon of course. It is associated specifically with this festival, the same way some other foods are associated with other celebrations throughout the year. Everyone buys them for friends and family! In stores, you can see high piles of these nicely-decorated gold and red boxes, and people are walking the streets with their arms filled with boxes, like people with Christmas gifts. 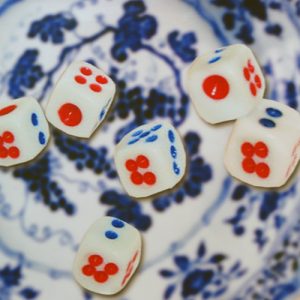 The dice games are played EVERYWHERE. And it may very well be a specialty of this area, rather than a tradition seen throughout China. For that game, six dices are thrown in large ceramic bowls and the combination of numbers that come up define which prize is won.

As you walk the streets, you can actually hear the sound of dices being thrown in bowls.

Retailers give customers chances to play the dices if they spent a certain amount of money in their store. The credit card company’s salespeople have a display in the street and you can play the dice game if you register for a credit card (hmmm, it is an interesting sales strategy when you know that most retail stores don’t accept credit cards!).

Last week, at a lunch of the ex-pat association, we played the game of course… The prizes? Tupperware boxes!

On our street, tables have been set up and the prizes there are large bottles of cooking oil. Interesting, no? 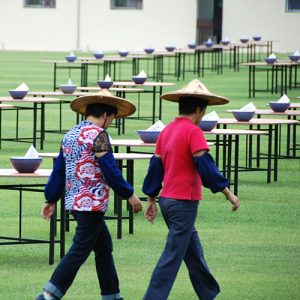 This afternoon, on the island of Gulang Yu, they even had a huge set up of over 100 tables with bowls on their soccer field.

I am telling you, this is a serious affair here. The fascinating thing is that the number which makes you win the dice game is… 4! I know, the number “4” was bad luck when I tried to get a phone number… but I guess that when you play a dice game, it is actually good luck. Well, I am so confused now. Confusing China.