I have been living in China for 4 months and have wanted to write such a post for at least the past 3 months.

And the recent discussions in Bali and particularly the reaction to the Canadian position, which is simply that “it wants all countries to be part of an agreement, including developing countries such as China and India”, have made it impossible for me to delay writing about it any longer.

China has a HUGE pollution problem and anyone who believes that the world can be effective in dealing with global warming without including China in the treaty doesn’t understand the reality of the problem China currently has… and it is going to get worse before it gets better because China also has the huge challenge of maintaining its economic growth to “feed its people”.

The good thing is that it is starting to be discussed in some great articles such as this 2006 New York Times article (the best I found on the topic).

But let’s forget the stats for a minute, and just share a few very personal notes. The photo above is the view from our apartment in Xiamen, a 3-million habitant city on the coast of China, across from Taiwan. In the middle of the day. And not on the worst day we had there. On the worst day, the photo would have looked like a white-grey piece of paper, with nothing on it. And trust me, this was not due to fog!

This second photo is the way it looked on a good day last September. We live there with the air conditioning on and the windows closed even when the temperature is perfect outside (25ºC) because the air smells bad. And it is likely not the worst city in China. 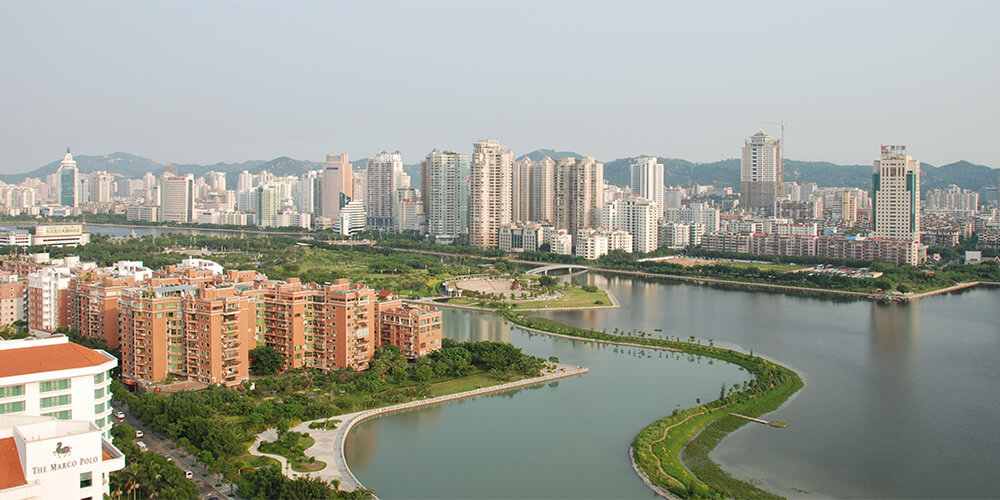 A Time Magazine article was mentioning that: “The World Bank calls China home to 16 of the 20 most polluted cities on earth”.

In a Wall Street article on “ex-pat” living around the world, journalists from Beijing, Shanghai and Hong Kong were all stating that a negative aspect of living in those cities was “pollution”.

You may have heard that Beijing is getting ready for the Olympic Games and plans to shut down factories around the city and limit car traffic for a couple of weeks before the Games to improve air quality during the Games. But you may not have heard that already now when an important dignitary visits Beijing, factories are closed and car traffic is limited. Beijing needs to hide the reality of its situation from the world.

When flying from Shanghai to Beijing recently, we also had a chance to see a little bit the magnitude of the problem: for the whole duration of the 2 ½ hours flight, the only thing we could see below us was smog…

I will let you read the revealing article from the New York Times, but will simply extract 2 quotes from it: “The increase in global-warming gases from China’s coal use will probably exceed that for all industrialized countries combined over the next 25 years, surpassing by five times the reduction in such emissions that the Kyoto Protocol seeks.” and “Already, China uses more coal than the United States, the European Union and Japan combined. And it has increased coal consumption 14 percent in each of the past two years in the broadest industrialization ever. Every week to 10 days, another coal-fired power plant opens somewhere in China that is big enough to serve all the households in Dallas or San Diego.” …

PS: Let’s not forget that China’s pollution is the developed countries’ responsibility too, as we all benefit from China’s low-cost exports to such a large extend… Food for thought… I would love to know what you think! You can comment below.