A little bit more than two weeks ago… Tuesday night. 6 PM. Newark airport in New York. In line at the gate for our flight to Dehli. The agent is desperately searching through our passports. “Where are your visas?“. “Visas? What visas? For India? We need a visa?“.

I know, it is difficult to believe that the seasoned traveler my husband is assumed that we did not need visas for India and did not check. Oh, well.

So, as they say in Monopoly, move immediately to the next stop… Singapore! An unexpected day in Singapore, an island nation, at the tip of the Malay Peninsula, Malaysia, and the smallest country in Southeast Asia. 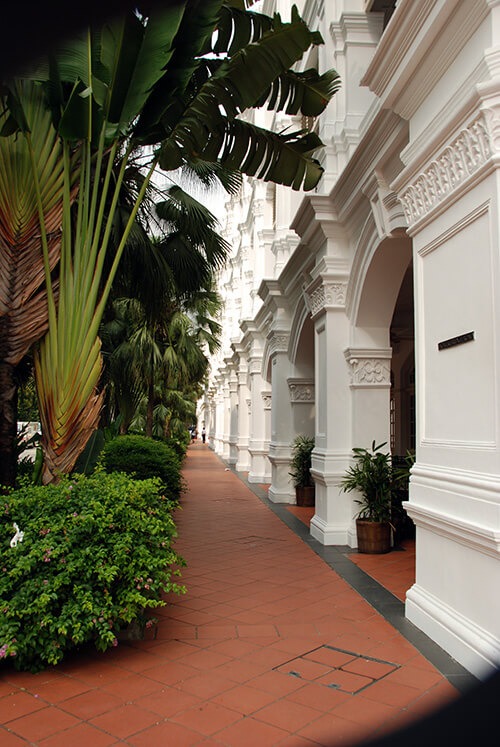 I was surprised to see the strong British influence there. You have to go from one place in Asia to another to start understanding how extensive the efforts from Western nations, and in particular Great Britain, had to be in order to establish trade posts all over Asia.

We enjoyed walking along the river and spent a great evening at the famous Raffles hotel, named after the British gentleman, Sir Thomas Stamford Raffles who landed on the main island in 1819 and developed Singapore on behalf of the British East India Company. It is a big white hotel, of colonial design, with several lovely interior courtyards, bars, and restaurants. At the Long Bar, sitting down for a drink was like being back in time, in the 19th century, the atmosphere was colonial, with ceiling fans and dark wood… Really cool!

The evening seafood dinner outside in a courtyard was a very nice conclusion to this unexpected day in Singapore. Not a bad trade compared to Dehli!